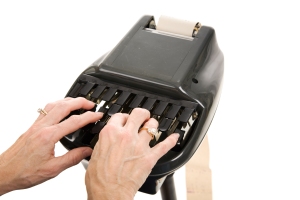 In the last two articles in this series we noted that one of the main objections to arbitration is its cost.  Some folks are convinced that arbitration is just as expensive as litigation in court.  I have found that not to be true, but encounter that perception frequently.  I had a discussion about that with a lawyer just today, in fact.

The main thing that drives up the cost in arbitration – as in any adversary proceeding – is discovery.  So we began looking at ways used to reign in costs in arbitration starting with document discovery in general and electronically stored information in particular.

The next form of discovery that we will consider is depositions.

Do you need them at all?

Of course, the way to save costs would be to simply not allow depositions at all.  In fact, in some smaller matters, that is the default.  But, while arbitration matters usually don’t need the full range of discovery and cost we see in litigation, there shouldn’t be a “trial by ambush” either.  In fact, under AAA Commercial rules for example, the Arbitrator must “manage any necessary exchange of information among the parties with a view to achieving an efficient and economical resolution of the dispute, while at the same time promoting equality of treatment and safeguarding each party’s opportunity to fairly present its claims and defenses.”  So if depositions are actually needed to obtain necessary information, they should be allowed.

When are depositions really needed?

Here is a way to think about that.  With the advent of e-mail and electronic document storage, there is often a record of day-by-day events for important matters in a case.  This is particularly true for the kinds of cases often the subject of arbitration.  The contracts and formal documents are likely to be stored electronically, of course.  And people really don’t talk on the phone or in person quite as much as they once did.  So there is often a record of the parties’ communications in e-mail exchanges and the like.  E-mails tend to be fairly informal and candid.  Thus, you often don’t need to rely on someone’s memory of what happened months or years ago at a meeting or in a call.  Key events are often reflected in real time in e-mail and attached documents.

This often means you can eliminate the depositions we often see in commercial cases these days that go like this:

Q:  Marked as deposition exhibit 278 is an e-mail that appears to be from you to Mr. George Johnson dated January 7th 2013. Did you write this e-mail?

Q:  And here you say, “You’re right.  The entire shipment was defective, and we are really sorry about that.” Did you write that?

Q:  And when you wrote that, did you mean that entire shipment was defective, and your company was really sorry about that?

And on it goes.  It’s hard to see how this kind of deposition is particularly useful.  You have the e-mail admission, and that’s what you will be relying on at the hearing anyway.

And yet, there are times when depositions are needed to understand technical terms, the importance of a sequence of events or other matters.  You may also want to see what key facts are admitted and which are not.  Often in a commercial arbitration it is more often the inferences and conclusions to be drawn from underlying facts that is really in dispute.  But there are sometimes actually disputes as to what happened.  Sometimes even the authenticity of an e-mail is an issue.  But not very often.

This suggests that depositions be limited to matters where testimony can advance the inquiry.  But you can’t expect the arbitrator to micromanage every question or topic.  That would be too expensive.

So the way to think about your case is to see if there is important information that can be gained from a deposition and to be prepared to explain, at least in general terms, why that is so and why there isn’t a different way to get it.

There are then useful approaches to making sure that depositions are not just being taken for the sake of taking them.  As with document discovery, an arbitrator can be fairly helpful in “saving counsel from themselves” by requiring an efficient process that forces everyone to get to the point quickly.

Here are four approaches to consider.  I have seen a number of them work very well.  First, is simply limiting the time for depositions.  Each party could be given, for examples, ten hours in which to take depositions.  They can call anyone they want during that time, but still have the time limit.  Then the arbitrator can build in an “escape valve,” so the parties can come back for more if they can show they need them.  They usually don’t come back because they have used their time very efficiently and gotten what they need.   I’ve seen this work very well in cases I have handled both as counsel in arbitration and as an arbitrator.

Second is deciding at or shortly after the scheduling conference who the limited number of deponents will be and the general time for each.  It may only need to be one or two for each side.  Again, this will tend to get everyone to the point.

Third is to make at least some use of 30(b)(6)-type depositions in the case.  The Federal Rules allow depositions on identified topics where a representative who has looked into the issues speaks for his or her company on pre-designated topics.  It may seem odd to import a fairly technical federal rules-type procedure into an arbitration.  But in the right kind of case, I have seen this work to speed things up while still getting the information a party needs to present its case or defense. This can be combined with limits on time or number to make sure things don’t get out of hand.

The fourth is to simply have counsel agree to interview a witness on some specific topics just to clarify key issues.  Of course, both counsel would be present and the interview would proceed in questions and answers.  But it may not be necessary to have a formal deposition with all its expense to allow counsel to understand some technical matters or specific things raised in some documents.  This alternative probably won’t serve the purpose in every case, but in some situations it may well be all you need.   You can even agree to record it to have a record for those few times where the exact answer might be critical.

Electronics are cheaper than cars and airplanes

One final thing.  For many matters, phone or Skype depositions or interviews can work very well. Again, you can record them if you feel a record is necessary.  That can save time and travel.  In fact, there probably isn’t much excuse for not using available technology for fairly routine matters that simply need clarification.

Third party depositions and subpoenas are another tricky and sometimes expensive area in arbitration.  We’ll take that up next.